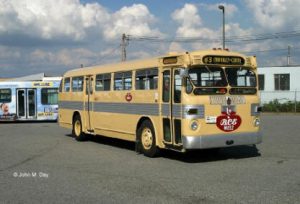 To assist with the “rails-to-rubber” conversion program of the late 1940s/early 1950s, the British Columbia Electric Railway acquired a large number of gasoline-engined Twin Coach buses. By 1950, models 34S, 38S, 41S, 44S and 44D were represented on the company’s roster. Twin Coaches were the dominant type of motorbus in the B.C. Electric and B. C. Hydro fleets throughout the 1950s and progressively retired through the late 1960s when GM diesels were acquired in large numbers.

The BCER numbering scheme identified motor buses with the “M” prefix, to distinguish them as oddities in what was at the time a much larger electric fleet. The “8” signified a bus assigned to the North Vancouver, where rail service succumbed to buses in 1947.