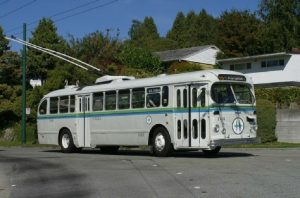 2416 was the last trolley coach purchased new by the B. C. Electric Railway. The T48 model is longer and wider than the earlier T44, featuring a higher seating capacity of 48 (however, most BC T48s were modified to have single offside seats to accommodate more standees than previous coaches). It was also one of the last trolleybuses built by CCF-Brill in Fort William, Ontario. Having retired 1984 after three decades in service, it is preserved today in the livery of the B.C. Hydro and Power Authority, the successor to BC Electric. 2416 often appears at TransLink events, the most recent being the 70th anniversary celebration of trolleybus service in 2018 and the launch of the battery-electric bus trial on Route 100 in 2019.

IMPORTANT COVID UPDATE! We're making preparations for a return to normal. We'll keep you posted as we resume TMS activities! Thank you for your support and understanding. Dismiss