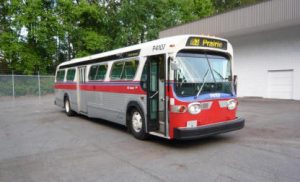 By 1982, the GM “New Look” had undergone its fourth revision. Introduced in 1972, this revision would be the last of the original “Fishbowl” design. By then, suffixes -A and -N were added to model numbers, respectively denoting air-conditioned and non air-conditioned buses. GM would revise the New Look a fifth time with a major facelift in 1983, eliminating the characteristic “Fishbowl” windscreen and naming it Classic (in contrast to the more modern RTS introduced in 1977). Existing “Fishbowl” orders, however, would be produced into 1986.

4107 is equipped with a turbocharged Detroit Diesel 6V92TA engine and low-geared transmission, earning it the nickname “Hillclimber” as it was better suited for the hilly topography of Burnaby, the North Shore and the Tri-Cities. 4107 was purchased for North Vancouver, and later ran from Burnaby, Surrey and Port Coquitlam. It was finally retired by Coast Mountain Bus Company in 2007 after spending some time in storage.