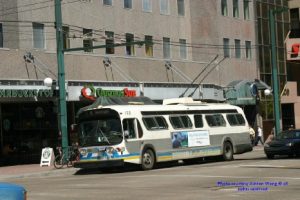 Donated by the Edmonton Transit System, this trolley coach produced by a collaboration between General Motors and Brown, Boveri & Cie. (BBC) represents what could have ran along the trolley wires in Vancouver and Burnaby between 1982 and 2008.

A contender for the large order of trolleys placed in the early 1980s to replace the Flyer E800s and remaining Brills, a competing bid was chosen instead, resulting in the ultimate purchase of Flyer E901A and E902 trolleys that served for more than a quarter century before being superseded by our current fleet of New Flyer low-floor units. Meanwhile, Edmonton purchased more than 100 of these unique coaches, some of which had also been leased to Toronto and sold to operators in the U.S. and Bulgaria.