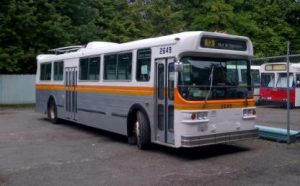 What exactly is a “Triesel”, anyway? A trolley that’s been converted into a diesel bus! The plan sounded as though it would work: build brand-new coaches with old powertrains recycled from scrapped Brill trolleys, some of which were nearly three decades old. What resulted were buses whose modern appearances wrote cheques that their old and tired powertrains couldn’t cash. After the all-new E900 trolleys were delivered and commissioned in the early 1980s, BC Transit quickly got to work on these coaches, replacing the decades-old electric drivetrains with newer, more potent diesel ones.

Although most “Triesel” E800s had their trolley collection equipment removed, making them appear nearly identical to the factory diesel D800 buses, 2649 is one of two coaches to have it retained and modified to deice trolley wire during winter months. It was last used by Coast Mountain Bus Company for deicing in 2008. It has since been stripped of deicing equipment, having been superseded by brand-new, purpose-built deicing trucks.