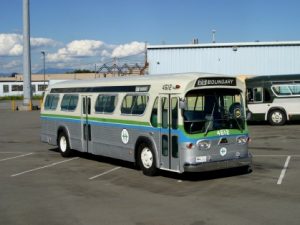 Even though GM vehicles were heavily featured in BC Electric’s (and later BC Hydro’s) fleet in the rest of the province, the Vancouver division mostly standardized on Twin Coach and Canadian Car buses. Only in 1964, five years after its introduction to the North American market, did the “New Look” (or “Fishbowl”, after its large, bulbous windscreen) become part of the Lower Mainland fleet. BC Hydro, having succeeded the former BC Electric, purchased 16 such buses for its North Vancouver transit services. 4612 later served in Burnaby and Surrey on low-ridership routes due to its low passenger capacity, owing to its shorter 35-foot length.