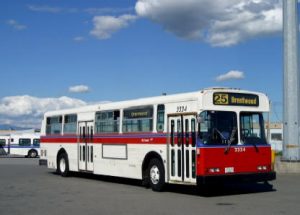 In addition to the huge 245-unit order of 900-series trolleybuses, Flyer Industries also won a contract to supply 35 diesel-powered versions of the model. These coaches arrived before their electric counterparts, and some lasted into the new millennium. 3334 was one of the last remaining units from this order and was received by TMS in non-operational condition; it is possible that it was retired during an engine repair or rebuild due to the parts we found missing during initial inspection. Since then, our mechanics have performed extensive diagnostics, repairs and testing to bring 3334 back into good operating condition.