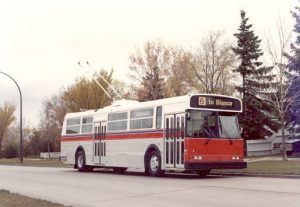 Despite having been offered by Flyer from 1981 until 1986, the E901A and later E902 trolley coaches were only purchased new by BC Transit, much like the ETS and its BBC trolleys, to replace its fleet of Flyer E800s and remaining Brills in the early 1980s. With all-new powertrains, these coaches had the smooth acceleration, power, and modern technology the preceding E800s lacked. All but one of these trolleys, which was engulfed by flames at Oakridge Transit Centre, remained in service until 2008.

A number of these trolley coaches were purchased from TransLink by the province of Mendoza, Argentina after retirement, while 2805 and a parts bus were donated to TMS. Unfortunately, our coaches were stored outside in a lot during the 2010 Olympics, allowing metal thieves to strip valuable metals from their propulsion electrics. After determining that both coaches were damaged beyond repair, 2805 was eventually repurposed into an office unit while the parts bus was scrapped. While an unsuccessful attempt has been made to get assistance from the present-day New Flyer Industries Group in repairing 2805, and efforts have been made to purchase and reimport a working unit from Argentina (all of which have now been retired by Mendoza), the chances of seeing an E900-series trolley in operating condition today are extremely slim.