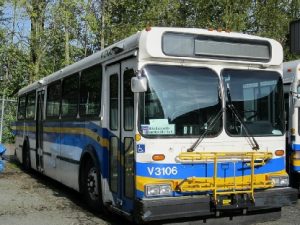 In July 1986, Dutchman Jan den Oudsten acquired Flyer Industries from the government of Manitoba and renamed the company New Flyer Industries. Introduced in 1987, New Flyer’s High Floor buses were their first all-new designs since 1967 and a significant breakthrough in how transit buses would be designed and built in North America. Under the ownership of den Oudsten, New Flyer adopted technology and manufacturing processes from his family’s existing manufacturing company, Den Oudsten Bussen, which built highway coaches and transit buses for European customers. Among the European innovations brought to North America by the High Floor buses were their tubular steel semi-monocoque construction, clad in aluminum and fibreglass body panels.

3106 was built in a “semi-suburban” configuration with overhead reading lights and soft, front-facing seats in addition to a narrower rear door than its urban-use siblings. Originally allocated to limited-stop and suburban express routes on which we typically see double-decker buses today, 3106 was retired from revenue service in early 2010. However, much like our CCF-Brill CD52As, 3106 lived a second life during the 2010 Winter Olympics as one of 160 overload units to provide additional capacity for the sharp increase in transit ridership. Although most D40s were scrapped following the conclusion of the Winter Games, 3106 was sold off as a complete bus alongside a handful of other survivors. Like most ex-TransLink buses that hit the market after retirement, 3106 is equipped with a blanking plate over where its farebox was once installed. However, 3106’s blanking plate is inscribed with the message “Welcome Aboard” since the farebox was removed while it was still owned and operated by TransLink.