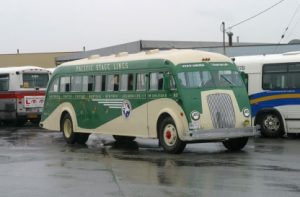 63 was one of 17 PCT-32 motorcoaches built by Vancouver-based Hayes Manufacturing Company between 1936 and 1937. Before the Second World War, they were the pride of the Pacific Stage Lines fleet, but such was the advancement of vehicle technology during the conflict, they were decidedly ‘old fashioned’ when peace returned. They were demoted to second-tier service as newer vehicles arrived. 63 was withdrawn from service in 1951 and donated to the Vancouver Fire Department to be converted into an emergency rescue vehicle. Later, it became a canteen for firefighters. In the early ’80s, it was replaced by another vehicle and returned to BC Transit, who restored it to operating condition. Remarkable as it may seem, 63 is BC’s oldest operational and road legal motorbus and the only known operational Hayes bus in the world.