At 12 noon on Saturday, February 4th, coach #4612 departs on our first fan-trip of 2023. It won’t be its first outing. Trevor Batstone drove the 1964 GM TDH4519 “Fishbowl” in the Lunar Parade on January 22nd. Then it will  perform two private charters during this week, culminating with the fan-trip on Saturday.

This Sunday, 29th January our volunteers were busy putting the finishing touches to the bus. Matthew Walker has fitted a Grant Money-Meter farebox – bring some spare change to donate to the Museum and hear the musical tones once part of every bus ride in the sixties and early 1970s! (The musical fareboxes were introduced in 1960 –along with tokens rather than tickets — and were replaced by the simple ‘Duncan’ in 1973.)

The tour was programmed by Milan Streit with assistance from Andrew Joyce. We’re sure everyone onboard will enjoy the fan-trip. Hopefully this will be the first of many in 2023! (This fan-trip is now sold out!)

Matthew Walker makes some last-minute adjustments to the farebox and affixes the licence plate. 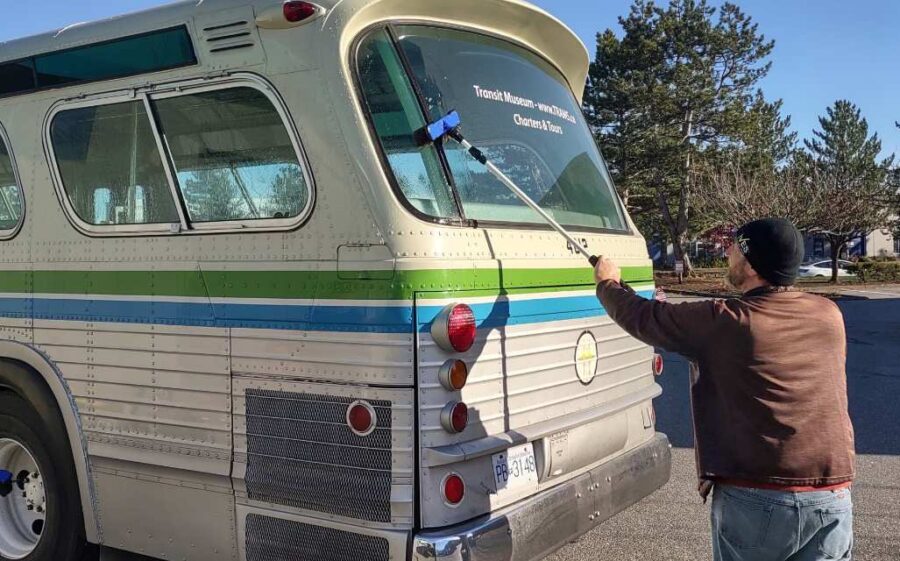 Well, this week, we have a “housekeeping” entry. But it’s big news!

We’re going on a Fan Trip! It’s aboard 1964 TDH4519 #4612. We’ll travel around Surrey and Delta, stopping for photo opportunities and some interesting points along the way. The route isn’t fully planned yet, but don’t let that stop you from reserving your seat!

The fan trip is open to all, at our regular price of $30 (Members) / $35 non-members. To provide maximum viewing experience, only the number of forward-facing seats will be available. Of course, you can sit anywhere you like, except for that one reserved seat in front. In addition, we’ll only fit four on the back bench – so that limits the seat spaces available to 30. This trip is sure to be popular – reservations are now available – BUT MEMBERS GET A SPECIAL ADVANCE BOOKING PERIOD. To reserve, you must log into Admidio first.

Your browser must accept cookies in order for us to validate your membership.

Once logged in, select Web Links from the dark grey bar on the left. Click on the first link presented. You must sign-in again! Click Continue to reservations page under the TMS logo. (We’re investigating ways to make this process simpler!)

Non-members will be able to reserve any remaining seats beginning Monday, January 23rd.

The trip will depart from Scott Rd SkyTrain on Saturday, February 4th at 12 noon, The duration is approximately 3 hours.

Unsure of where to board at Scott Rd? We’ll email you details, explaining that and lots more, whether you travel by car, bus or SkyTrain. Watch your email (and junk inbox!) a few days before departure date.

We encourage you to pay for your ticket(s) after you make a reservation. (You can reserve tickets for a companion who isn’t a member). We accept credit cards, and also debit cards bearing the VISA or Mastercard logos.

If you wish to pay onboard, please remember: for this tour we will only accept cash.

Behind the Christmas Lights Tours

If you went on one of our Christmas Lights Tours, you would have met our hosts and driver at Scott Road Station. The hosts keep track of our passenger roster, collect fares if people haven’t pre-paid and answer the phone if any of our passengers is delayed and wants us to hold the bus. One host goes along with the tour and acts as the tour guide and makes sure we don’t leave anyone behind at one of our stops. What you don’t realize is that there are a few other Transit Museum volunteers involved before and after the tour.

Before the tour becomes a reality, much research is involved to design a route. It starts with the memory of past tours and the great lights displays from last year. We only have a couple of weeks as most people start building their displays in early December. Some of the past displays are gone so we have to adjust the tour and see if there are new displays to discover. After some mapping and test driving, a route is determined. We try to be flexible and in fact we added a couple of houses at the last minute this year. Every year 3 or 4 people are involved in the final design of the route. 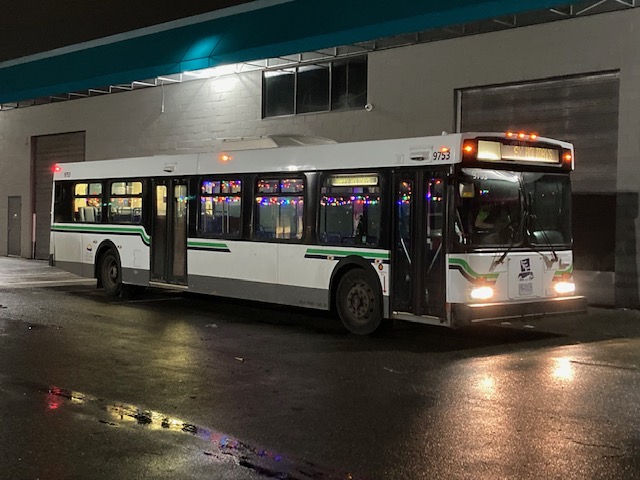 Members of the shop crew decorate the bus under the supervision of our electrician. In past years the bus became “Rudolph” with antlers, eyes and a big nose but this year with the big move to Langley we decided just to decorate the interior.

We realized a few years ago that we needed a reservation system and a way for our riders to contact us with questions or concerns. A fairly simple (and free!) software system developed for a small airline was adopted by our webmaster. People can reserve and prepay for a seat or have the option of making a reservation and paying in person at Scott Road Station. Our hosts are emailed a passenger roster before the tour and know who to collect fares from and if there are any seats available for walk on customers. A phone system is activated for last minute problems. We like the bus to be at Scott Road Station at 6:30pm so that people can spot it and know where to go, and our first step is to meet at the Langley Shop an hour early. Someone gets the bus started and aired up and backs it out of the shop. The driver arrives and does the pre-trip inspection which consists of an air brake check, fluids and lights are checked and they make sure that a fire extinguisher, first aid kit and emergency reflective road kit are on board. They walk around the bus and do a visual inspection of the wheels and tires. The driver fills out and signs the pre-trip form and completes a driver log to track the hours that they have driven in the past week. Just before leaving, the driver calls our recorded phone service confirming that the bus is on its way to Scott Rd.

It’s about a half hour drive to Scott Road Station, so the bus departs at 6pm and the shop is locked up. At around 10:30 the shop crew returns to meet the bus as it arrives after the tour. The driver hands in the paperwork and lets us know how the tour went and if there were any problems with the bus. The fuel level is checked and the bus floor is swept and washed. Wheels and tires are inspected. Bus batteries are turned off and the bus is ready for the next trip.

Everyone involved is a volunteer and just as you support the Transit Museum by purchasing a ticket, our planners, hosts, drivers and shop crew are contributing their time to help with this valuable fundraiser. Thank you everyone for keeping the Museum alive and active. 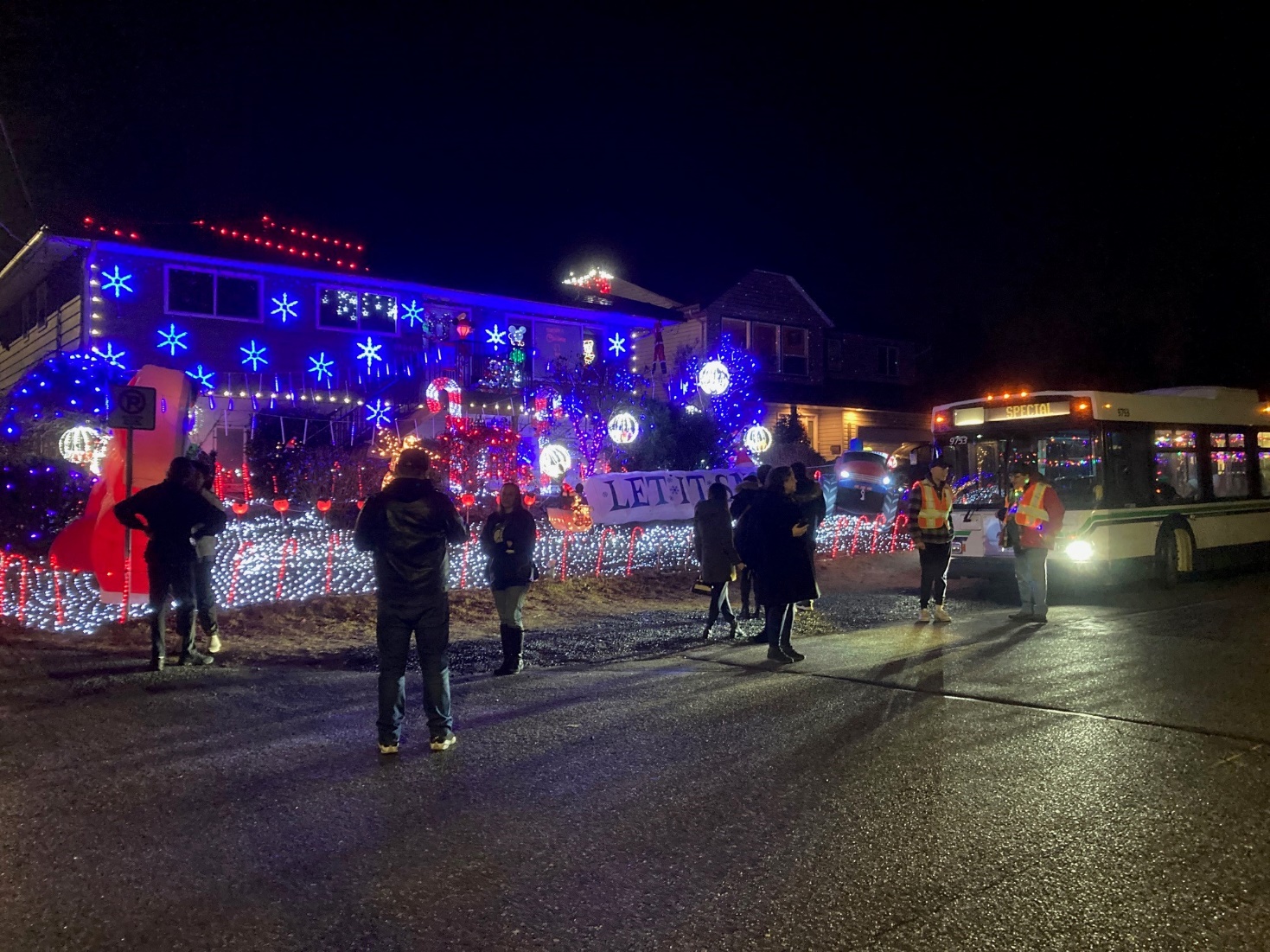 Our Christmas Lights Tour organizer also has a few words to say about what makes them possible. “I have had one of the best CLTs in years!” says Lawrence Walker, especially that of Saturday December 17th…

“With Stephan Goodman checking off names, now a TMS host in training, Chris driving superbly, always a character, lamenting on how much he missed driving bus. Andrew and Chris working well together with Andrew Joyce directing. The roads looked wet but we’re a lovely sheet of ice. The owner of the “Inflatable House” in North Delta  coming out and greeting us, (he also emailed us before we even had a route plan), Chris asking Andrew if he had a few different places that he didn’t , and taking us past them including Alex Jager’s house!”

In closing, we must also mention our other hosts (Sue & Matthew), drivers (Evan, Michael H. & Alan), service personnel getting 9753 ready, (Milan, Matthew, Jason S., Jason B., Richard, Sean, and of course, Bryan who stood by ready to drive our ‘rescue’ bus (4612) if it was needed – which it wasn’t! My apologies to anyone I’ve missed. A pat on the back to you all… 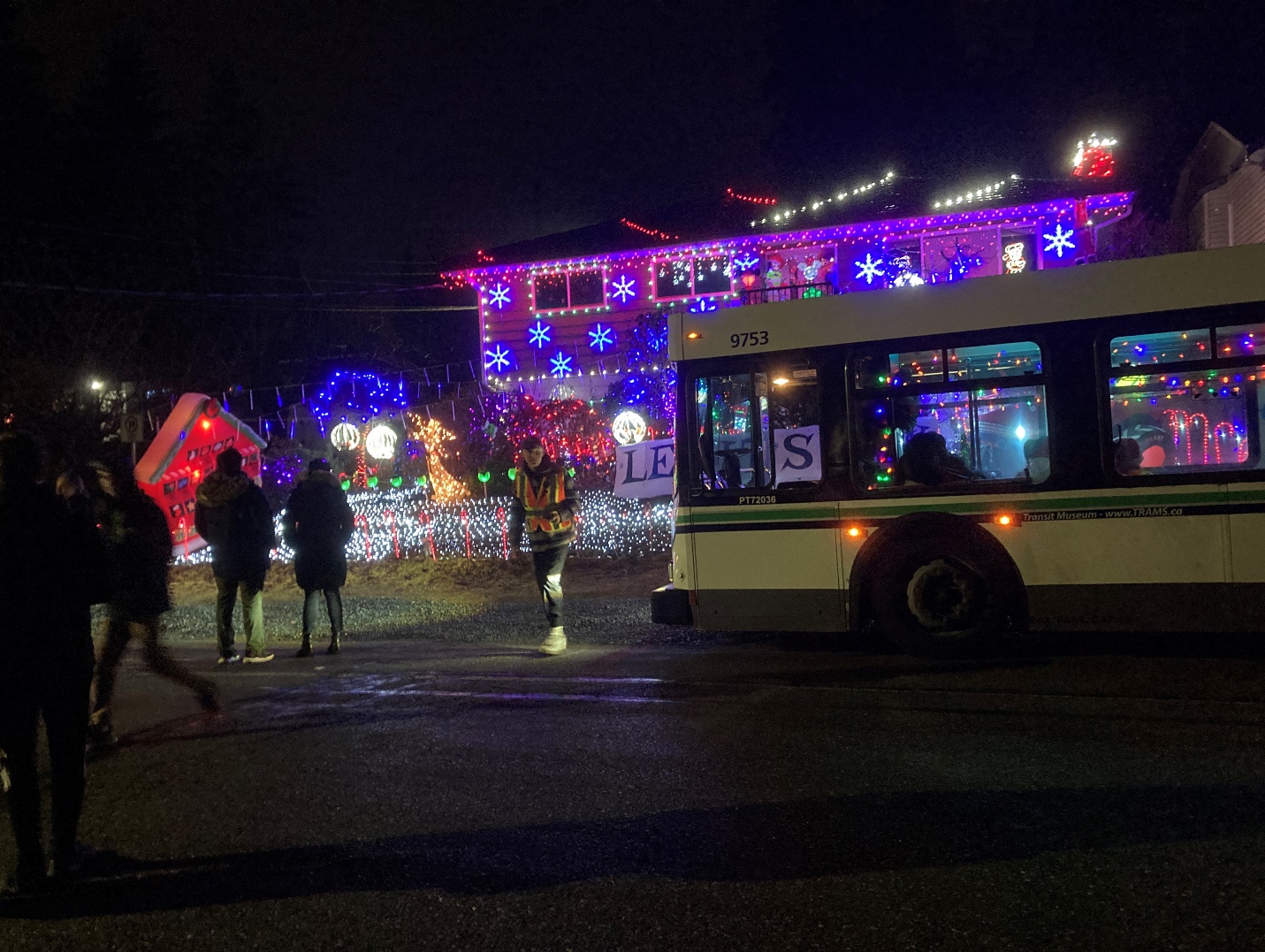 What better way to thank all our volunteers for a successful summer season of public engagement than a BBQ! Not just for the hosts, but drivers and our mechanics too! That’s what happened on Sunday September 25th; it was organized by Sue & Lawrence Walker. (Lawrence is our Events Coordinator, but in reality, it appears to be a “co-Events Coordinator”) Wife Sue seems to provide the “muscle” – not literally, but (as many of us volunteers can attest), the asking, persuading, gentle cajoling to make things happen. And while the Board approved spending of some Society funds for the BBQ, in the end very little was necessary as Sue got donations of food from Save-On-Foods and No-Frills. We thank both organizations.

Lawrence & Sue Walker thank some of our volunteers at the Appreciation BBQ on Sunday, September 25th at our Roseberry shop.

Watch for more photographs in the next edition of our newsletter, The TMS Transfer.