A Christmas tradition returns. This year our Christmas Coach, #9753, will tour houses in Surrey and Langley. This year, though, we will limit the number of tours to six: three public and three private charters. As President Bryan Larrabee says, “we’re all exhausted after completing the move. We can’t impose on members to do more.”

It’s unfortunate because there was demand for additional public tours, coupled with a decision to restrict seat sales to forward-facing positions. All three tours were quickly sold out, although we did direct disappointed customers to a private charter organized by Andrew Joyce. Andrew, in cooperation with Lawrence Walker designed this year’s route.

On Saturday, December 10th, the first tour departed from Scott Road Station. #9753 was driven (expertly and very professionally according to Lawrence) by Michael Hayter. Future trips and the private charters will be driven by Chris Cassidy and Alan Mihatov. A shortened version of the route for the Blue Eagle Cadets/TransLink Police was driven by Evan Russell. Hosts for this first excursion were Lawrence, Sue & Matthew Walker. The coach was decorated by Matthew and Milan Streit. Photographs by Stephen Goodman. (Top to bottom: Sue, Matthew, our first customers!) 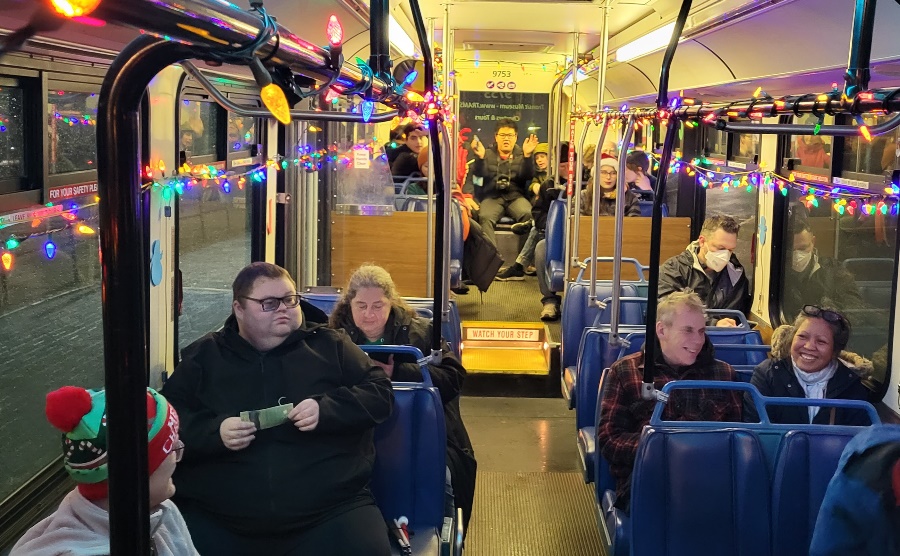